Editor’s Note: Getting paid- more evidence that meaningful AMC legislation at the state level is an appraiser’s best friend.

Getting paid by appraisal management companies (AMCs) in a timely fashion has long been a challenge for appraisers, who, in many cases, have been forced to wait months for their money. While several state boards have adopted “prompt pay” provisions into their appraisal regulations, it is rare for AMCs to face formal sanctions over late payments. In what many will view as a win for rank and file appraisers, the North Carolina Appraisal Board (NCAB) recently assessed a civil penalty against an AMC, Residential RealEstate Review, Inc., for its failure to comply with North Carolina regulations which require AMCs to pay appraisers within 30 days of the submission of the appraisal (N.C.G.S. 93E-2-4[d]).

The Investigation
The civil penalty originated from a complaint filed in December 2013 by an appraiser who claimed the AMC failed to pay within 30 days. After receiving the complaint, NCAB requested an audit of the AMC’s payments to North Carolina appraisers for the calendar year 2013. After examining Residential RealEstate Review’s payment schedules, NCAB discovered that out of 1,277 appraisal assignments in North Carolina that year, 74 of those payments were late- received later than the 30 day deadline.

On August 12, 2014, Residential RealEstate Review signed a Consent Order admitting to violating the North Carolina Appraiser’s Act by its failure to pay appraisers within 30 days and agreeing to pay a $1,000 fine. The penalty for subsequent violations can be as much as $25,000.

The Consent Order indicates that the findings of NCAB’s audit shows that every appraiser contracted by the AMC was paid within the calendar year, and all but two of the appraisers were paid within 40 days. While these findings do not paint too negative a picture of the AMC, the example set by NCAB’s sanction should serve as a warning for other AMC’s doing business in the state.

Working RE twice reached out to Residential RealEstate Review for comment, but no comments were received prior to publication. 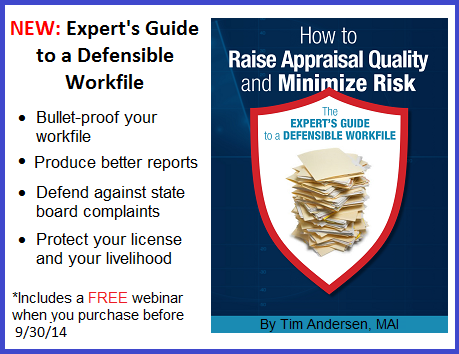 AMC Legislation
The North Carolina Appraiser’s Act is favorable to appraisers in a number of ways. It requires AMCs to carry a $25,000 bond to protect appraisers against AMC bankruptcies and non-performance; it requires every AMC to have a compliance manager on staff who is a Certified Real estate Appraiser, and it empowers the Board to “investigate or examine the books, accounts, records, and files of any registrant or other person relating to the complaint or matter under investigation” if the Board has reasonable grounds to believe an AMC has violated its regulations. Additionally, the Board also may issue subpoenas for people and documents in its investigations. NCAB’s ability to investigate the records of AMCs was likely crucial to uncovering Residential RealEstate Review’s late payments and solidifying the Consent Order.

According to Roberta Ouellette, North Carolina Assistant Attorney General and General Counsel for NCAB since 1995, the Board has issued 25 warning letters based on appraiser complaints, but this is the first civil penalty it has assessed. When asked why the Board chose to assess a civil penalty, instead of simply issuing a warning to the AMC, Oullette said that the number of times Residential RealEstate Review was late in paying appraisers was a deciding factor.

Ouellette said that NCAB’s audit of Residential RealEstate Review’s payment schedules is typical when dealing with complaints against AMCs. “It is a standard practice to request a spreadsheet of all appraisal orders in North Carolina (including transmittal and payment dates) when the Board receives a complaint against an AMC for nonpayment. At this point, we are asking for all of calendar year 2013 and the first six months of 2014,” reports Ouellette.

W-9 Dilemma
Complicating the AMC’s failure to pay appraisers on time is the federal requirement that companies collect W-9s from all their vendors. Businesses are required to file 1099s for every vendor that is paid over $600 in a year, and many companies make a practice of withholding payment until the W-9 is received from the vendor. In case involving the initial complaint filed against the AMC, the appraiser had not submitted a W-9 to the AMC and the payment was withheld on that basis, according to the AMC. However, of the 74 late payments that occurred during 2013, only 28 were late because the AMC did not have a current W-9.

This means that even if missing W-9s was the cause of some late payments, there were at least 46 instances of late payments not related to the W-9 issue. The Consent Order specifically states that the AMC has “implemented new procedures to ensure that W-9 forms are received and that payment is made within 30 days.”

Prompt Pay Provisions
Many states have adopted “prompt pay” provisions similar to North Carolina’s, although the enforcement of such provisions varies by state. At the time of this writing, the following states have some form of “prompt pay” provision in their AMC regulations or statutes: AL, AZ, CT, MD, MO, MT, NM, OK, OR, TN, MS. Many appraisers have found that such requirements have had a positive effect on the timeliness of payments by AMCs. Such provisions also make it difficult for AMCs headed for bankruptcy to build up millions in unpaid fees to appraisers like Evaluation Solutions and AppraiserLoft.

While it is rare for AMCs to face penalties for late payments to appraisers, in July 2012 an Arizona judge fined AppraiserLoft $855,00 for 171 violations of failing to pay appraisers in a timely fashion. Unfortunately, AppraiserLoft had already declared bankruptcy so the fine serves only as a warning to other AMCs in the state.

Appraisers can be certain that this latest case in North Carolina will cause other AMCs to reexamine their payment policies.

Many purchases include concessions but do you know when and how they should be adjusted for in the sales comparison grid in order to provide a defensible report? Are you clear about how to prove/support what the adjustment should be? If you find handling concessions confusing, you are not alone. It’s one of the top questions asked of presenter Richard Hagar, SRA. In today’s difficult environment, it’s more important than ever to learn from the experts about how to stay safe and successful- especially those who are busy appraising and who face the same difficult issues you do on a daily basis. In this two-part webinar, Hagar shows you how to identify comparables with concessions and walks you through how to use regression analysis, match paired sales analysis, the cost approach, the income approach and more to identify and adjust for concessions in both the subject property and comparables. Sign Up Now!