>> Editor’s Note: To help you stay up-to-date and connected, OREP/Working RE has established a Coronavirus (COVID-19) Discussion and Resource Page where you can share your thoughts, experiences, advice and challenges with fellow inspectors. See what Inspectors are saying here!

How to Determine Water Heater Age

As a home inspector, it’s crucial to be able to identify the age of a water heater to prevent corrosion and unnecessary water bills. Most hot water heaters are good for no more than 10 to 15 years. But how exactly can you tell?

In this article, we’ll walk you through some of the leading water heater brands and manufacturers, and give you a handy guide on how to gauge the age. So let’s get started.

Determining water heater age is simple on most newer models—the installation date is generally recorded on the information sticker. On older models, however, it’s likely you’ll need to do some detective work. You may want to start by decoding the serial number—find the details toward the side of the heater. It’s usually placed nearby the energy guide or warning labels. The serial number holds two crucial details: the month and year of construction. But this is where it gets a little tricky. Manufacturers tend to use different patterns or formats so you’ll have to find your specific manufacturer or brand in order to do this.

To help you decipher your serial number, we’ve put together a guide plus examples from multiple brands and manufacturers.

A.O. Smith: (Figure 1) uses a very basic system which should be straightforward to figure out. For their older, pre-1997 models, they state the year and week within the first four numbers. For example, YYWWxxxxxx. Current models use the same sequence. For models pre–2008, you should see a number followed by a letter ranging from ‘A’ to ‘M’ (excluding ‘I’). ‘A’ equals January and ‘M’ equals December. The two following numbers indicate the year.

Rheem: Rheem (Figure 2) also adopts a simple approach for their different brands. Their newer models, (constructed after 2000) are identified by the month, then the year of manufacture. In the first example we can see the first and second digits are the month. The third and fourth are the year. However, if you look at example two, you’ll notice the numerical order has changed slightly—instead of being the first four digits it’s displayed as the third to sixth. Rheem sometimes presents the key dates in this alternative way. For their older pre–1999 models, Rheem used weeks instead of months. 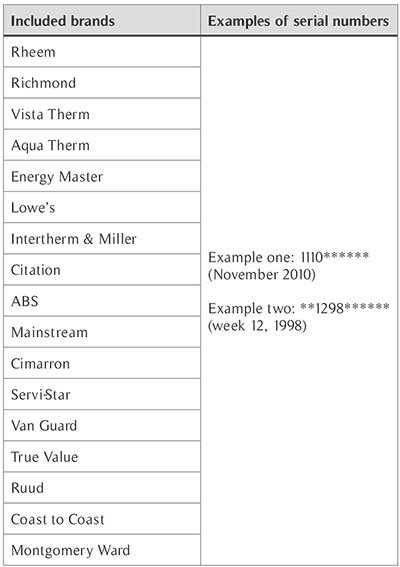 Navien: This manufacturer takes a totally different approach (Figure 3). On newer models, you’ll see four numbers followed by a single letter. After this letter, there’s a number indicating the year of production followed by another letter. On older models, Navien simply put the year after the first four numbers. They’ve also chosen not to indicate which month or week their units were built.

Bradford White: Instead of using numbers, Bradford White uses two letters (Figure 4). The first indicates the year and the second signifies the month. American Water Heater: Because American water heaters are, as of 2001, a subsidiary of A. O. Smith, they now use an identical serial numbering system. If you look at our examples in Figure 5, is a pre–2000 and the second is pre–2008. In example one, they’ve referenced the year as the initial two digits. The next two figures relate to the week number. In example two, we see a system consisting of the letters ‘A’ to ‘M’, excluding ‘I’, to represent the month. The third and fourth numbers indicate the year. 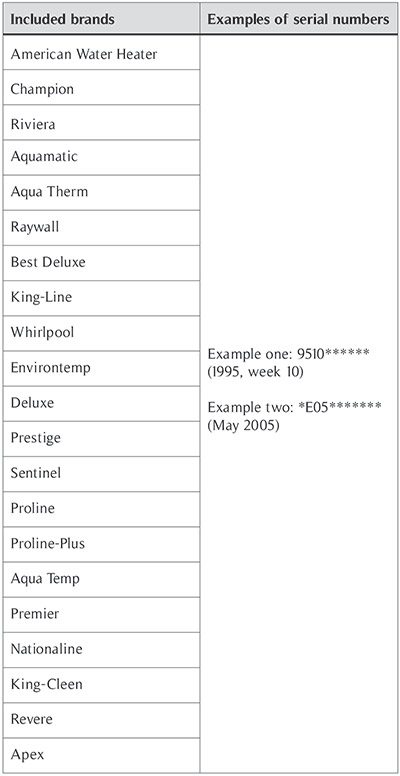 State Industries: For State Industries, we’ll show you three examples. They have two general formats—one using only numbers, and another using letters and numbers (Figure 6). For the first example, numbers one and two represent the year, and numbers three and four indicate the week. In our second and third examples, State Industries uses the same code structure—letters to indicate the month and numbers for the year. However, the format of the third is slightly different—it has an extra non-relevant number in front of the date sequence. 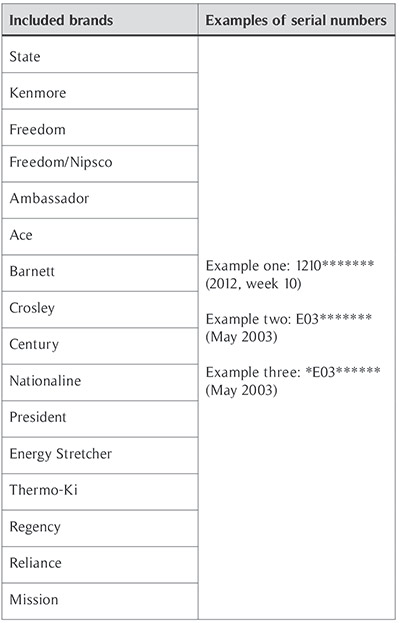 For the letters, they use ‘A’ to ‘M’ (excluding I)—’A’ being January and ‘M’ December. Then the two following numbers indicate the year of production. For example, 06 equals 2006.

Lochinvar: Similar to Bradford White’s—Lochinvar uses letters for the month and year (Figure 7).

Rinnai: Rinnai products carry two serial number pattern (Figure 8). On their newer models, they use letters to indicate both the month and year. For their older water heaters, pre–2010, Rinnai used numerical references. The first two for the year and the following two refer to the month. Their current system starts from the year 2009.

When Should You Replace Your Water Heater?
A water heater that is made from durable material and regularly maintained should last many years. However, no matter how good your water heater is, it won’t last forever. Here are a few signs to watch for that could indicate your water heater is running out of steam.

1. Age of the Unit: The first question to ask yourself is “How old is the water heater?” The general lifespan could be in the region of 10 to 15 years. Using this guide should help you determine your water heater’s age. Most experts, however, will likely suggest replacing your unit by the time it reaches its 15th birthday. Even if it’s still working efficiently, its performance may soon begin to drop due to its age.

3. Higher Heating Bills: A considerable amount of household energy is spent on heating water—18 percent. When an old water heater begins to reduce in performance, so does its efficiency. As a result, you may notice a rise in your heating bill.

4. Corrosion: Noticing corrosion on your water heater is a sure sign it’s time for a replacement. This shouldn’t, and rarely does, appear until the unit is significantly old. One sure way of spotting this is when you see red discoloration in the water. Red tinted water may mean rust inside the water heater.

Age Is Not Just a Number
Water heaters don’t last forever—on average, most will need to be replaced within 10 to 15 years of service. However, unless you’re keeping track of its birthdays, you’ll have to determine your water heater’s age for yourself. Fortunately, this is fairly easy as long as you know the serial number and brand name—and you have a handy guide to help you decode it.

Peter Gray has been a homeowner for 35+ years and has always done his own repair and improvement tasks. As a retired plumber, Gray now spends his time teaching others how they can fix leaks, replace faucets, and make home improvements on a budget.

Note: The Summer 2021 issue of Working RE Home Inspector is mailing now to over 25,000 home inspectors nationwide. OREP Insureds enjoy guaranteed delivery of each print magazine and many more benefits. 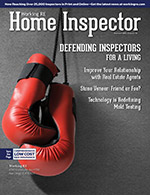