Flashing
The location where the deck’s ledger board meets the home is a common location for water entry and/or rot. Flashing should be installed behind the ledger board to prevent a place for water to enter. The flashing can be metal (such as aluminum) or membrane. In many cases, the flashing on older decks is totally missing or, even if it is installed, is often insufficient and barely functional and visible. Adding flashing to an existing deck can be difficult, at best.

It is also best if the deck surface is a step down from the doorway’s threshold to help prevent water or snow from possibly backing up into the door opening.

Joists and Hangers
The underside structure is critical in supporting a deck; it can be considered the bones of the deck’s body. While some older decks often have joist spacing of 24” on center, newer decks most often will have 12” or 16” floor joist spacing. Most composite decking manufacturers will also require 12” or 16” joist spacing. The joists are the on-end structural members that support the deck’s walking surface. Damaged or improperly sized or secured joists can cause the overall deck structure to weaken, therefore presenting a possible hazard. Often, older deck joists are only end nailed, meaning the ends of the joists are fastened using a basic nailing pattern through the deck’s outer rim joist. Over time, the nails will come loose and then gaps can exist, such as in the photo below. 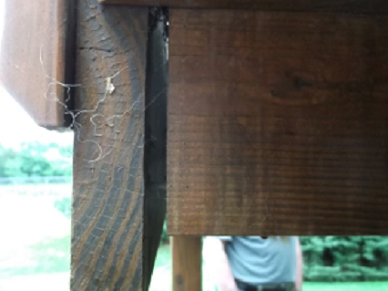 The deck above had a good amount of racking when standing on top. Racking is horizontal movement and most often indicates a weak deck structure. Once these nails continue to pull out, the deck’s structure is compromised and safety becomes a real concern as the deck can now pull apart. In the photo above, the outer rim joist was literally separating from the individual floor joists. The rim joist and floor joists were only end-nailed; a substandard method of deck construction. Modern decks would use joist hangers to properly and securely attach the joists and framing together. Hangers can be added to older decks that have only end-nailed joists in most cases to shore up the structure.

Hurricane or seismic straps are most often also used to secure perpendicular members together in lieu of relying on gravity. A small earthquake, for example, could allow a deck’s structural components to lift upwards if only gravity “holds” the joists and girders together. The photo below shows a properly installed joist hanger. 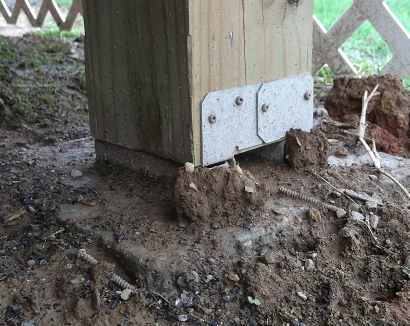 Deck joists are most often 2×10 or 2×12 lumber depending upon the deck’s size and span. Joist hangers designed for this size of lumber should be used. Each hole in the joist hanger should be filled with a properly sized nail or screw. This is really the only place that nails should be used when building a deck. Filling only some of the hanger nail holes may not provide a durable connection for years to come. Also, sometimes it may be difficult to tell, but joist hangers should not be bent, cut, or otherwise modified in the field. Various sized and orientated joist hangers exist for different applications. Modified joist hangers often indicate that the installer didn’t have the proper hanger on hand and simply modified and used whatever he had on hand. This will often be a red flag indicating that other short cuts may have been made when building the deck and hidden hazards may exist. Also, the joist hanger’s flange should be flush with the lumber to which it is fastened.

Staircases
Most decks have a staircase to a patio or the adjacent yard. Like interior staircases, modern building standards have specific requirements for height and width of staircases as well as their hand railings. Home inspectors are not performing code compliance inspections, however, the wise inspector should be familiar with the various codes used in his area. The staircase should be safe and easy to traverse. Many older deck staircases have cracked or improperly secured stringers (the underside framing that holds the staircase together), cracked treads (steps), or insufficiently sized stair heights or depths. The cracked components can present an obvious hazard as they further weaken. An improper stair height or depth can be a trip hazard going up or coming down the staircase.

Staircases should be at least 36” wide. The riser height (the vertical distance from one step to the next) should not exceed 7 3/4” and the stair tread depth should be no shallower than 10”. The most common issue that I find while inspecting a deck staircase are risers that vary greatly in height or are well beyond the 7 3/4″ standard . Modern standards say that tread heights can not vary more than 3/8” between the shortest and tallest. Anything more than that can present a trip hazard.

Again, like many internal staircases, deck staircases typically have at least one open side. The open side can allow someone, such as a small child, to fall off the staircase below the railing. To prevent this hazard, components such as balusters or spindles are required. The spacing of these balusters or spindles should not exceed 4”; this spacing helps prevent a small child from getting his head stuck in the railing.

Guard Railings
Like the deck’s staircase, someone can easily fall off a deck that is elevated above the ground. Modern standards require guard railings on decks if the walking surface is greater than or equal to 30” above grade. Older standards said this 30” height pertained to the ground immediately off the deck, whereas newer standards extend this vertical measurement out 3’ horizontally from the deck’s perimeter. For example, a deck is built on the side of a hill and the vertical difference in height between the ground immediately next to the deck and the deck’s surface is 25” (no railing would have been needed per the older standards). However, the ground leading away from the deck extends down a hill. Extending 36” horizontally out from the deck, the difference in vertical height may be 39”. A guard railing is now required.

Guard railings should be at least 36” vertically and should have no spacings wider than 4”, like the staircase openings mentioned above. Many older porches and decks have some sort of guard railing, but a considerable number of older porches and decks have only horizontal rails or have short railings. Having only horizontal components can allow a small child to climb them like a ladder and fall over the other side. The photo below shows a good example of this flaw. 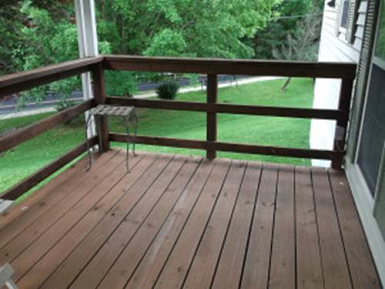 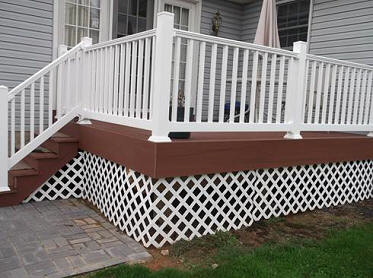 The photo above shows a proper guard railing on a newly built deck.

Summary
A very basic thing that any home owner should do on a regular basis (for example, monthly) is to simply stand at the center of the deck and try to cause the deck to wobble or rack simply by moving your body kind of like doing a hula hoop. If you feel the deck’s structure move at all, this is an obvious indication that something is loose or improperly supported or bracketed. A qualified deck contractor should be called to make needed repairs at once.

About the Author
Matthew Steger, owner/inspector of WIN Home Inspection, is a Certified Level 1 Infrared Thermographer and an ASHI Certified Inspector (ACI). He can be reached at: 717-361-9467 or msteger@wini.com.