However, the notion that a home inspection is strictly “visual” has long sparked debate among inspectors regarding just how far an inspector should go to discover hazards and defects in the property. After all, testing the GFCI outlet, opening the electrical panel with a screwdriver, or the use of any tools beyond a flashlight, could technically be classified as going beyond a “visual inspection.”

Jerry Peck, a retired home inspector who now works as a litigation consultant and hosts InspectorAdvisor.com, says that even when an inspection is referred to as a visual inspection, if tools of any type are used, whether the tool is as simple as a screwdriver, or more complex such as a moisture meter or receptacle outlet tester, or if appliances are operated, then the inspector has raised the bar beyond a “visual inspection.”

The practice of labeling an inspection as strictly a visual inspection dates back to the 1970s when the profession was just getting started, according to Peck. “I suspect the last ‘visual’ home inspection was in the 1970s or early 1980s by one of the ‘old guys’ who helped start this profession. I know the pioneers in Florida did not really do a ‘visual’ inspection even back then. When they suspected a moisture problem, they would take tissue paper and press it against the wall, if the tissue stuck to the wall, the wall was ‘wet’, if the tissue did not stick to the wall but fell off and felt moist, the wall was ‘damp’, which indicated a potential moisture problem. As soon as they pulled out a tissue and used it to determine if the wall had moisture, the inspection was no longer just visual,” says Peck. “A truly ‘visual’ inspection could basically be done by just walking around and looking, with the inspector’s hands kept in his or her pockets,” Peck insists.

Bruce Ramsey, an inspector from Georgia with 15 years’ experience, supports Peck’s conclusion, pointing out that inspections that adhere to the Standards of Practice of many associations are not simply visual, despite what many inspectors put in their contracts. “Testing receptacles, operating faucets, flushing toilets, operating windows and doors, probing for moisture, operating HVAC, are just some of the non-visual activities that are part of a home inspection. When you add in tools like moisture meters, infrared cameras, thermometers and receptacle testers, inspections move farther away from purely visual,” says Ramsey.

Legal Ruling
One legal ruling that relates to this topic is the case of Nauman vs. Real Estate Support Services (RESS), wherein Paul and Nora Nauman (the Naumans) sued RESS for failure to discover defects in a property they purchased. While the ruling is dated, having been issued in 1994, it nevertheless sheds light on how the courts interpret “visual inspection” wording in a contract. In the case, RESS had a contract with Coldwell Banker Relocation Services to provide home inspection services where the objective of the relocation home inspection report was to “provide the client with a report of the relocating employee’s home, consisting of a series of visual inspections.” While Coldwell Banker was listed as the client, the inspection agreement stated that “the client may at its discretion disclose [the report] to other interested parties.”

The Naumans made an offer on a property listed by Coldwell Banker that had been inspected by RESS six months earlier. During the purchase transaction, the Naumans were told that their offer would be accepted only if they accepted the home inspection report by RESS, which they did.

Shortly thereafter, the Naumans discovered a defect in the chimney not mentioned in the inspection report. The report had merely indicated the flue was “acceptable.” The Naumans then sued RESS for damages.

The Naumans ultimately won the claim with the appeals court rejecting the defense of a “visual only” inspection, and holding that the Naumans were a “third party beneficiary” of the contract between RESS and Coldwell Banker, and were consequently entitled to bring suit over the inspection’s deficiencies.

This case may not completely remove the “visual inspection” defense from home inspectors (they still can’t see through walls), but it does offer valuable insight into how some courts interpret the responsibilities and duties of the inspector. It also is a sobering reminder for inspectors that when they mark an item “adequate” or “acceptable,” they are certifying that they have inspected the item. To limit their liability, it may be wise for inspectors to qualify their statements in similar cases, describing to what extent an item was inspected and what specialists should be contacted if further information is sought.

State Requirements
The Standards of Practice (SoP) in some states have specific requirements that the inspection cannot be strictly visual. For example, Indiana’s SoP states that the inspector must “inspect the interior components of service panels and subpanels.” However, state SoPs can also help to limit an inspector’s liability. In Indiana, the state SoP specifically clarifies that inspectors are not required to “inspect the interiors of flues or chimneys.” Inspectors working in states with SoP should be mindful of what they are and what they are not responsible for.

Local Standard of Care
At the end of the day, most home inspectors just want to do a thorough job and stay out of trouble, protecting their license and livelihood while providing a quality service to their clients. The best way to do that, according to many veteran home inspectors, is to meet the “standard of care” required of your profession. Scott Patterson, veteran inspector and expert witness, reports that he has seen the issue of “visual inspection” arise in more than one legal defense. “I can tell you firsthand that the standard of care, i.e., what other professional inspectors in your area would do, is the best defense and what most, if not all, attorneys strive to show,” says Patterson. Patterson continues, “If you are in a licensed state that has an SoP, as long as you perform your inspection to the standards of the licensing law, it makes it extremely difficult for a plaintiff to claim you were negligent. This is just another unexpected bonus from home inspector licensing laws.”

Todd Stevens, experienced home inspector trial lawyer and past President of the San Diego Bar Association, says that the home inspector’s responsibility for a visual inspection is a tricky area. “I’ve litigated cases that involve mold or other defects that were behind a wall. The plaintiffs will typically argue that the inspector should’ve seen it anyway, or that something was visual that at least was a red flag and the inspector failed to mention it,” says Stevens.

When there’s a disagreement on what constitutes a standard of care in an area, it will frequently turn into a battle between expert witnesses. “When cases go to trial, experts are typically hired by both sides, with the expert on one side saying that the standard of care is X, Y, and Z, and the other expert will say the opposite,” Stevens explains. “Good experts are home inspectors themselves or former home inspectors who know the industry well. The jury then has to decide what’s the more reasonable requirement or standard.”

The best way for inspectors to protect themselves is to document and photograph any red flags, put them in the report, and state that further testing is required, according to Stevens.

Coming Up: Free Training Webinars
Learn from the experts with these free webinars!

Claims and Complaints: How to Stay Out of Trouble
Date: March 7th, 10-11:00 a.m. PST
Presenter: David Brauner, Senior Insurance Broker OREP
David Brauner, Senior Broker at OREP, shares insights and advice gained over 20+ years of providing E&O insurance for inspectors, showing you how to protect yourself and your business. Register Now! 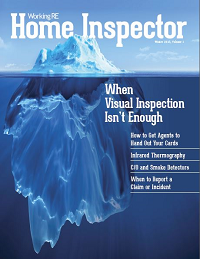 >> Send Your Story Submissions or Ideas to the Editor: Isaac@orep.org