I recently helped a friend respond to a state board complaint. I was both aggravated and bewildered by the process. It bothered me that a good, honest appraiser who had produced a good, credible appraisal had to take time, effort and money to defend himself against a complaint because an agent was angry about the value. When all was said and done, it made me wonder whether the complaint process is an effective way to maintain appraisal standards or simply a means for disgruntled unintended users to get revenge.

The complaint system against appraisers has serious flaws that hurt good, honest appraisers. Conversely, it tends to ignore the deficient appraisers for whom it was intended. While the administrative disciplinary process is similar to the U.S. Justice System, it is separate and distinct, in ways that hurt appraisers. Worst of all, there is no evidence it serves the intended goal of USPAP—to promote and maintain the public trust.

One significant misconception about complaints is that if you “push” a value or appraise something “too high” you are more likely to get into trouble. There’s a good deal of evidence that the opposite is true. The vast majority of complaints aren’t filed by lenders or GSEs concerned about an aggressive valuation.  Most complaints are in fact filed by unintended users—buyers, sellers and their agents. I surveyed 48 state agencies and of the 10 that provided data, every one said a majority of the complaints are filed by unintended users. Complaints by unintended users ranged from a low of 60.7% in Mississippi to a high of 89.9% in Arkansas. The data provided doesn’t track the reason for the complaint but why else would individuals who have never heard of USPAP file a complaint? Hint—it’s not because the report lacked a sufficient sales history of the comparables. I’ve assisted a handful of appraisers with complaint responses and each of those complaints was based on value. Administrators with several of the states surveyed agreed that value is the motive behind most complaints.

In theory, disciplinary actions have nothing to do with value. As long as you derive and report that value in compliance with USPAP, you should have nothing to worry about. In practice, however, complaints are related to value and the likelihood of a disciplinary action is much greater when a complaint is filed. So contrary to common belief, the evidence suggests that you are more likely to face disciplinary action by appraising “too low” rather than “too high.” That’s bad, considering the appraisal industry is supposed to be a check against under-secured loans and over-inflated real estate values. This unintended but inherent bias in the complaint process is likely to cause some appraisers to shy away from accepting assignments where the contract price appears questionable. But if disciplinary actions aren’t based on value, then it shouldn’t matter if that is the reason a complaint is filed, right? Wrong!

Here’s where it’s important to understand the similarities and differences between the administrative complaint process and the U.S. Justice System. Most of us have seen enough crime and cop movies and/or TV to believe we understand how the court system works but the administrative system is different. Both systems share the same principles regarding deterrence, reformation and removal. Fines and time served (in the form of continuing education, mentoring or suspension for appraisers) are penalties intended to deter bad behavior. Rehabilitation or education is typically used in cases of negligence or ignorance to correct bad behavior. The harshest punishments are license suspension or revocation and are typically reserved for the most severe offenders who intentionally and knowingly violate USPAP. Think of suspension as serving time in prison and revocation as a life sentence.

In spite of these similarities, there are three significant differences between the systems, and none are good for appraisers. Like lawyers, accountants and other professionals licensed to promote public trust, appraisers agree to forfeit some rights. In civil or criminal courts we have the Fifth Amendment right against self-incrimination but in the administrative process we have agreed to submit for review our appraisal, workfile and all other relevant evidence that may be incriminating. In addition, investigators in the administrative process are required to look beyond the complaint for wrongdoing.

The Sixth Amendment right “to be informed of the nature and cause of the accusation” prior to trial doesn’t work the same in the disciplinary process. How complaints are received and investigated varies to some extent state to state, but all states are required to follow the guidelines set forth by the Appraisal Subcommittee. Title XI Policy Statement 7 Section B2 says “States must analyze each complaint to determine whether additional violations, especially those relating to USPAP, should be added to the complaint.” So a complaint filed by an angry agent or homeowner because of a “low” value will be subject to a mandatory USPAP review of the entire report and work file. Think of your neighbor calling the police because your music is too loud. Policy statement 7 would require the police to search your house for any other possible violations and the administrative rules would require you to unlock all the doors and hand them all your records.

Another inherent disadvantage for appraisers is that our response to a complaint comes before we know what, if any, violations are found. After receiving a complaint notification, appraisers are required to respond. This response is part of the investigative file, so the investigation cannot start without offering this opportunity to respond to the appraiser. In addition to addressing the charges within the complaint, the response is an opportunity for the appraiser to show investigators that any potential USPAP non-compliance is not worthy of disciplinary action. After the investigation, appraisers are allowed the opportunity to defend themselves against the specific violations found but this comes after non-compliance has been identified. At this point, the defense revolves more around disciplinary action rather than compliance. The cart is in front of the horse. An appraiser’s initial defense against violations comes before knowing what violations are found. As such, it is possible that appraisers might point out deficiencies that might have gone unnoticed. It’s much easier (and cheaper) to mount a defense when you know the specific charges, and since the initial response is part of that defense, wouldn’t it make sense to submit it after the state has identified specific wrong doing?

It’s important to point out that appraisers, like any licensed professional are not forfeiting any constitutional rights. Administrative reviews, investigations and disciplinary actions surrounding licensing are different. In order to maintain public trust, licensed professionals like appraisers, lawyers, accountants and others agree to agency oversight, which often requires mandatory submission of records. Should professionals become involved in the civil or criminal justice system, all our civil rights still apply. It is only in the administration of our profession where we face these disadvantages.

It’s also important to point out that state agencies are not out to get you. During the course of helping my friend and researching this article, I spoke to nearly a dozen workers from state agencies. They were all friendly and tried to help where they could. They are just doing their jobs like you and I, but within a system that is flawed. One head enforcement officer noted that he sees the role of his department as going after bank robbers, not jaywalkers. They are looking for the bad actors that diminish the public trust. Agency employees are like reviewers, they are looking at appraisals rather than appraisers. Similarly, my complaints are with the system, not those who administer it. 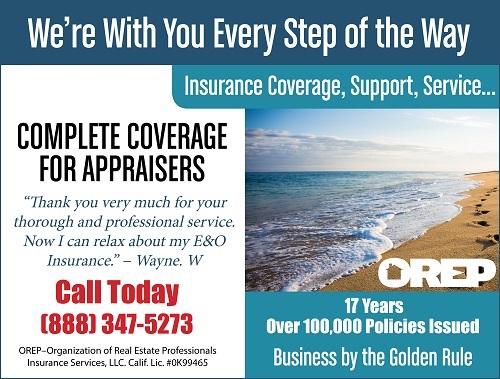 Public Trust?
I’m not against maintaining appraisal standards or even using disciplinary actions to that end, but I’m not aware of evidence that the complaint process promotes or maintains the public trust. Two years ago I asked the Appraisal Standards Board and the Appraisal Foundation President if they had surveyed public trust. They had not. This is the organization founded to maintain and promote public trust and it has not attempted to measure the level of that trust. So how do we know what effect disciplinary actions have on public trust? Without a survey or some measurement, we don’t know the effect the complaint process or any other USPAP related policy has on the public.

In Texas, over the past three years, 25% to 33% of complaints resulted in disciplinary action. That means that 67% to 75% of those angry or concerned enough to file a complaint received a letter explaining that their complaint had no merit or jurisdiction. It makes sense that the majority of complaints filed are by unintended users. There are more of them than there are intended users. So both statistically and practically they are the largest segment of the public but they are the least informed with regard to proper appraisal practice. This raises a good question: are we targeting the promotion of public trust to the right segment of the public?

It’s free and easy to file a complaint against an appraiser but costly and difficult to defend. Complaining is as easy and as common as breathing. We all do it. I’m complaining about complaints right now! Solutions, on the other hand, are tougher to come up with. I don’t have all the answers but I do have a few suggestions for how to improve the system.

Not many appraisers face disciplinary action but those who do appreciate what a harrowing experience it can be. Over each of the past three years in Texas, less than 1% of appraisers have been disciplined but three to four times as many have had complaints filed against them. A proper complaint response and defense take time and usually involve counsel from a lawyer and/or consultant. After receiving a complaint, appraisers are supposed to notify their E&O carrier and will have to disclose the complaint on applications to new clients. In addition to the time and money spent responding, there is the ever-present worry over the outcome, which can impact an appraiser’s ability to earn a living. The complaint process will never be entirely fair. There will always be complaints filed by angry unintended users based on nothing else but a “low” value. That said, the process has plenty of room for improvement and can at least be made fairer.

Steve Kahane is a certified residential appraiser in Cypress, TX. After moving from Chicago to Texas 16 years ago, he transitioned from commercial to residential appraising and has valued properties ranging from $1 to over $100 million. He is a member of the National Association of Appraisers, board member for the Association of Texas Appraisers and was the recipient of ATA’s 2015 Outstanding Service Award for the Houston region.