Editor’s Note: You may be interested to hear what (at least one) Appraisal Management Company (AMC) thinks about the effect of low-bid appraisal ordering on quality, the topic of last issue’s News Edition (Low Bid Appraisal Ordering and Its Effect on Quality).  Appraiser George Mann posted the following comments to his blog. Given all that we hear about the overall low quality of appraisals, his response and rational for “low bid” ordering might surprise you.

December 9, 2013 – Post No. 34 – Some of you may have seen a recent article by Isaac Peck, Associate Editor of Working RE. His article was titled Low Bid Appraisal Ordering and Its Effect on Quality.

This is a well-written article and obviously presented some factual situations. However, as a review appraiser for almost 22 years, I feel obliged to present the other side of the coin. I have overseen the order and review of about 15,000 appraisal reports over the years. Whether I was an employee of a bank or acting as their Agent, I was/am essentially an AMC. We do the same thing whether we are employees or hired companies/contractors.

Therefore, awarding to the low bidder should not adversely affect the quality of appraisals over the long run.

All of the good appraisers out there need to realize that almost every assignment they have won is because they were the low bidder! I doubt they would say their work product was inferior for all of those assignments.

Let me provide some actual numbers from the past few months of awarding assignments in a specific market for a specific client. Amazingly, all of these appraisals have been reviewed and accepted without any significant revisions. All of them were awarded to the low bidders.

In October, we awarded 31 appraisals with fees totaling $77,600. If we had the philosophy that all low bids would result in poor quality appraisals and we went with the second lowest bids (who is to say all of them would result in better products?), the fees would have totaled $99,900! What kind of service would we be providing to our client (or employer) if we had them (or really the borrowers) pay $22,300 more for these appraisals that had no assurance of being any better than the low bid reports? That would be the kind of service that would drive you out of business (or fired, if an employee).

I once told an appraiser that we were concerned about engaging him because his fees were so much lower than others in the market. He retorted, quite strongly, as to what right I had to opine about how much money he thought his time was worth! Also, he said there are a lot of bad $5,000 (commercial) appraisal reports out there. You get what you pay for certainly doesn’t hold true in the appraisal arena.

While there is a lot of concern about AMCs saving $50 and getting a poor report that might be off by $50,000 on a house appraisal, this pales in comparison to the errors on the high end. We once had to lower a $500 million appraisal to $400 million.  Just because the fee was $50,000 didn’t mean the report was good. How many erroneous residential appraisals are needed to get to this $100 million error for one assignment?

KC Conway, CRE, published a report a few years ago that showed that appraisals on average were in error by about 20% (my personal data over the years shows an average of 22%-23%, albeit my data isn’t a scientific study like Mr. Conway’s). These appraisals probably had fees ranging from around $5,000 to $50,000. There is no guaranty of quality as fees go higher. 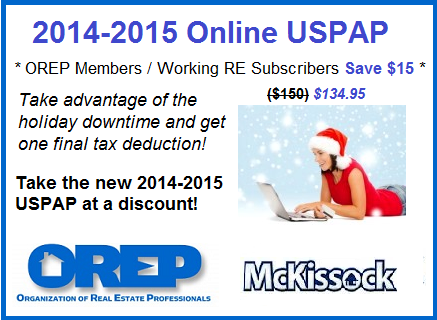 One common question I have been asked over the years was why do we go with low bids? There is a logic to this. If we have grouped a set of appraisers that we know are equal in competency, then the major decision maker becomes fee (and time in some situations).  As with the 31 appraisals I mentioned above. We know all of the appraisers in this market. We know which appraisers are say Level A or Level B (we don’t go down to the Level C or lower quality appraisers). So when we have them bid we know the competency is about equal and the likelihood of approving their reports is very high. Where is the logic in not going with the low bid?

There will always be those situations like Mr. Peck encountered. Every industry probably has something similar. But, what about the 60% or 70% or 80% or 90% of all appraisals that are done right and selected because they were the low bid. Not enough stories are written about those.

Postscript:  Mann owned and operated his own AMC for five years (Collateral Evaluation Services), selling his interest this year. He currently runs the AMC operation for Situs.com.  He handles mostly commercial work but orders residential appraisals occasionally and says he finds no difference in the results between commercial and residential. “Even if we ordered mostly residential appraisals say, for a bank’s mortgage company, we would all (commercial AMCs) operate the same way.  First, derive a list of quality appraisers.  Second, bid to them and the low bid would win 90%+ of the time.  And 95%+ of the appraisals would be acceptable on first review.  But I get to select only the good appraisers. That is 95 percent of the battle,” Mann says.  “As I have told appraisers for a decade or more, you can fire your clients.  I have had many tell me later that that was the best advice they ever got.”

About the Author
George Mann is a member of the Counselors of Real Estate (CRE).  During his 27-year career, he has been a fee appraiser, assessor, and reviewer. Mr. Mann has overseen the review of 15,000+ commercial appraisals across the USA and in eight foreign countries.  His weekly blog can be viewed here.