Editor’s Note: Agents and brokers are sometimes frustrated when an appraisal value comes in under contract price but pressuring an appraiser to meet a value is a violation of appraiser independence laws and can get you in trouble.

Appraiser Pressure: What Agents/Brokers Need to Know about Filing Complaints

No one needs to tell appraisers about pressure. Despite recent regulatory changes, such as Dodd-Frank, appraisers still face pressure every day. Instead of rabid mortgage brokers, like days gone by, today there is a new source of heartburn for appraisers: real estate agents.

Dodd-Frank defines a violation of appraiser independence as any instance where “A person with an interest in the underlying transaction…attempts, to compensate, coerce, extort, collude, instruct, induce, bribe, or intimidate such a person, for the purpose of causing the appraised value assigned, under the appraisal, to the property to be based on any factor other than the independent judgment of the appraiser.”

In recent years, appraisers have often been blamed for being “deal killers,” a code word for an appraiser who submits a value below the contract price. These days, it’s not uncommon for an agent or broker to call an appraiser, submit additional comparables for consideration, vigorously question the appraiser’s competence, and insist that the value of the property is higher than the appraiser’s independent opinion of value. But what many agents/brokers don’t understand is that such pressure is likely in violation of appraiser independence. And some agents take it a step further; they report the “bad appraisal” to their state appraisal board in what many view as retaliation for a lost deal. Such complaints are often substantiated and frequently dismissed by state boards, but nonetheless, can cause a litany of problems for the appraiser involved as well as backfiring on the complaining agent by getting them in hot water.

Stacy Roberts (quoted under an alias because she fears retaliation), appraising 27 years, recently had an angry agent file a complaint against her with the Colorado State Appraisal Board. 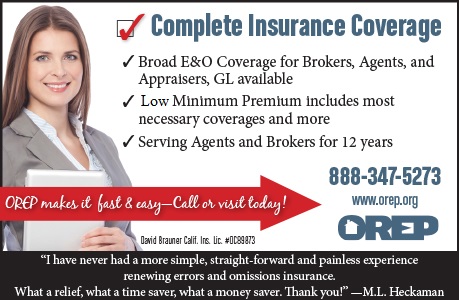 Back Story
Stacy Roberts, Certified Residential, says her story begins in a small subdivision in her area. The agent in question listed the property for $50,000 above what any other property in the area had sold for, and the property ended up selling for $40,000 above the nearest comparable. “My appraisal report included five comparables within the subject property’s subdivision. Two of the comps were model matches, with one even being on the subject property’s street. All comps had closed within 90 days. My goodness, I don’t think it gets much better than that,” says Roberts. “I did not want to leave the subdivision and go to another subdivision where houses typically sell for more, because I consider that to be fraud.”

Roberts says that when there is a “value dispute” between an appraiser and an agent, the agent typically submits additional comparables to the lender, who then may or may not contact the appraiser and ask for a review of the comps. In Roberts’ case, the agent opted for a more direct approach. “The agent ended up calling me in an absolute rage, screaming and yelling. I told her to submit her comps to the lender for a reconsideration of value and that I would be happy to look at whatever she sent and see if I missed anything. She kept screaming and threatening me, telling me that I’m stupid and I don’t know what I’m doing. She threatened to go after my license. I finally hung up on her,” says Roberts. “She made the same call to my manager and told him the same thing, and he gave her the same response I did.”

Complaint
Roberts says the agent never submitted any additional comparables for consideration, likely because she did not have any. “Instead of submitting additional comparables, the agent sat down with her seller and wrote a letter making a series of very libelous accusations against me. They called me lazy and incompetent. I’m offended because I work very hard. I’ve been an appraiser 27 years and I know my business. The verbiage in this complaint was so outrageous that I was sure the State Board would realize what was going on and just toss it,” Roberts says.

Instead of tossing out the complaint as she expected, her Appraiser Board pursued it. Roberts thinks one of the reasons might be because her Board is under the supervision of the Colorado Real Estate Commission. “I think it’s a problem because the Real Estate Commission is full of agents, so those relationships get a little too cozy. I was shocked that my Board was pursuing a frivolous complaint that had no foundation in reality,” says Roberts.

In response to what she felt was retaliation by the agent for simply doing her job, Roberts filed her own complaint against the agent with the Colorado Real Estate Commission. “My complaint said what you might expect, that agents are up to their old tricks and are just using a new weapon against appraisers. I said that this woman had violated my appraiser independence and that we should not be subjected to that kind of harassment and pressure just because we don’t meet value,” says Roberts. The Commission’s response to Roberts’ complaint surprised her. An investigator for the Commission told her that he hadn’t even read her complaint. “He said, ‘You can’t file a complaint against an agent. You’re an appraiser you’re not allowed to do that.’ I was shocked! I thought I had the same rights that everybody else does. My complaint was legitimate,” says Roberts.

The process, in Colorado at least, is biased towards real estate agents and brokers, argues Roberts. “Everybody should be treated fairly. If one licensee, agent or appraiser, files a complaint against another licensee, then automatically both individuals should be investigated. It’s one-sided because it is far too easy to fire off a retaliatory complaint against an appraiser for not meeting value,” Roberts says. “If the appraiser is going to have their work file pulled, the agent should have their file pulled as well. And the dispute needs to be arbitrated by an unbiased group of people: appraisers, agents, and regular citizens.” 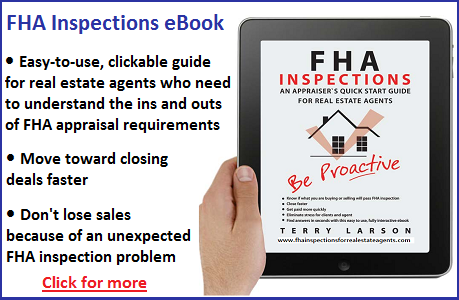 Results
Two months and several responses later, Roberts reports that the complaint against her is finally being dismissed and that none of the allegations were substantiated.

Even though the complaint was ultimately dismissed, Roberts feels the situation with the Colorado Real Estate Commission needs to be addressed. Additionally, Roberts says that situations like this are happening with increasing frequency. “I attended two continuing education classes recently and being threatened by agents this way was the main topic of conversation among appraisers. Other appraisers are quite upset about this too. I gathered from the other appraisers that it was all verbal at this point, but this is still a significant problem,” Roberts insists.

Roberts tells appraisers that speaking out about the problem is the first step to addressing it. “Appraisers need to feel that they can talk about it. They shouldn’t be scared of it. We all sit in our little home offices and feel like we’re alone and we don’t have a voice. I had every right to file that complaint and the Commission was out of line to refuse to investigate it. The fact that they didn’t is very disturbing. We just can’t have this type of pressure going on,” says Roberts.

Section 129E of the Truth in Lending Act mandates that: “It shall be unlawful, in extending credit or in providing any services for a consumer credit transaction secured by the principal dwelling of the consumer, to engage in any act or practice that violates appraisal independence.” According to Hagar, this means that appraisers have the power to stop a loan for a consumer’s primary residence if they feel their appraiser independence has been violated.

“Appraisers have the biggest bat they’ve ever had. They have the power to stop the loan and prevent closing. Appraisers who feel their independence is being violated can contact the lender’s Compliance Officer in writing so that they have a chance to correct what’s going on. If their appraiser independence is violated, it’s unlawful for the lender to fund the loan,” says Hagar. “Once the lender is notified, they can’t fund the loan unless they order either a full review of the appraisal in question or a whole separate appraisal if they want to be in compliance with federal regulations.”

Hagar also advises appraisers to file complaints with the relevant state and federal regulatory bodies, including the State Attorney General.

Finally, Hagar advises that in addition to complaining to state and federal regulators when pressured by an agent or broker, appraisers should also contact the National Association of Realtors if the individual involved is a Realtor®. In some cases, according to Hagar, state Realtor® associations may take action against unethical agents and brokers who attempt to pressure appraisers into meeting value.