Editor’s Note: The following is taken from the current print edition of Working RE magazine, the largest print publication for inspectors nationwide. OREP insureds enjoy a free subscription to WRE (get an E&O/GL quote from OREP in 30 seconds).

Most home inspectors have a basic knowledge of modern municipal sewer systems and an in-depth knowledge of modern residential drainage, waste and vent (DWV) systems. But how were those systems developed and what’s the recent history of the ways communities dispose of human waste?

Big Problems, Strong Odors
Through history, human waste presented a big problem whenever people congregated in cities. From the early civilizations to about 1850, waste was put in chamber pots, outhouses and pits or used for fertilizer, or just dumped in the woods. Human waste was not treated. Larger cities in advanced societies built sewer systems to flush waste into rivers or other nearby bodies of water. Dilution was the solution – these relatively small amounts of waste were diluted with lots of water and dumped downstream.

Several ancient societies developed basic sewage removal systems but ultimately they all just flushed the human waste into natural sources of water. As cities grew larger, problems developed with the stench and unsightliness of sewage, as well as contamination of drinking water. Most cities took drinking water from the source they were polluting with their human waste or from wells next to their human waste dumps. In the U.S. during the 1850s, cities developed underground sewer piping to carry waste away. In combined sanitary and storm sewers, storm water helped flushed away the waste from humans and domesticated horses and other animals. 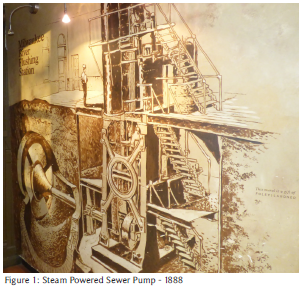 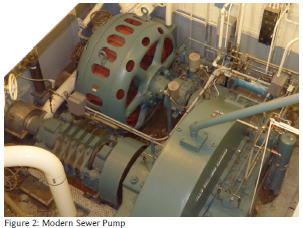 Polluted Drinking Water
In the mid-1850s, there was much debate about whether serious illnesses like cholera were caused by polluted air or water in major cities such as London, Paris, New York and Chicago. During years of debate, epidemics killed thousands. Eventually, doctors and public health scientists became convinced that drinking water polluted with human waste was causing the problem.

London developed its now-famous sewer system in 1870 to flush human waste into the ocean. Chicago constructed a huge Sanitary and Ship Canal from the Chicago River to the Des Plaines River. This system of three canals, built between 1892 and 1922, reversed the flow of the Chicago River; instead of discharging into Lake Michigan, it now flowed to the Mississippi River – good luck, St. Louis and New Orleans. The canal-to-river system is still in use but today the sewage is partially treated. You may have read that this canal is a possible entry point for invasive Asian carp into the Great Lakes because it directly connects the Mississippi River with Lake Michigan. Drinking water could not be trusted in large cities anywhere. Europeans solved the problem by drinking beer and wine. Wealthy people, afraid to bathe in city water, left for “the country” with its clean water and air. Some think that fancy perfumes developed in Paris were an attempt to mask body odor from not bathing.

Los Angeles developed sewage piping systems to deliver human waste to huge settling and drying ponds. The dried goods were sold as fertilizer for crops. Chicago’s water was so polluted that cholera became a major issue. The planners of the Chicago World’s Fair (which was called the Columbian Exposition) of 1893 worried that the spread of cholera would discourage visitors from attending the fair. It was held in downtown Chicago at the current site of the Museum of Science and Industry on Lake Michigan. The Chicago Director of Works and entrepreneurs attempted to build a 100-mile pipeline for natural spring water from Waukesha, Wis., to the fairgrounds for drinking water. Apparently, unions and Waukesha residents stopped the pipeline construction. Water was eventually brought in on railroad cars and piped from a spring south of Waukesha, and sold at the fair for a huge profit.

Combined Sewers
Many older cities still have combined sanitary and storm sewers (Figure 3) left over from the days before sewage treatment. Using rainwater to flush waste from the pipes was an important part of the system. Modern cities and new areas of older cities now install separated sewers: sanitary sewers to treat human waste and storm sewers to drain rainwater into rivers and streams. Separated sewers reduce the amount of water needing sanitary treatment. Cities that still use combined sewers suffer from sewage overflow into rivers or backups into basements whenever heavy rain falls. Some of these cities developed large deep-tunnel systems to store and hold overflow that would be treated over time or directed to separate sewers. 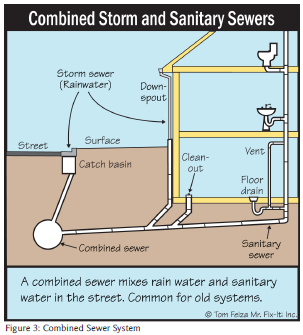 Today’s Scientific Solutions
Scientists, federal laws and health officials now ensure adequate sewage treatment systems and safe drinking water. In response to the Federal Water Pollution Control Act of 1972 and the Clean Water Act of 1977, cities have worked hard to improve sewage treatment, minimize overflows and treat drinking water. But that is not true in Third World countries. According to a recent United.

Nations report, six billion of the world’s seven billion people have mobile phones, but only four and a half billion have access to a flush toilet. The real problem is where the human waste flows – into local rivers and other bodies of water.

There are open sewers in the city streets of many underdeveloped countries. Look for the Associated Press reports on the upcoming 2016 Summer Olympics in Rio de Janeiro. Two-thirds of the untreated human waste generated in that city is flushed into rivers, lakes and the Atlantic Ocean. These bodies of water are so polluted with human waste that there are major concerns about Olympic water sports. Watch out for the floaters. Yuck. How the Plumber Saved Civilization
While government scientists improved municipal sewage treatment and water supplies, plumbers and engineers worked on systems found in homes. Indoor plumbing, including traps and drainage waste systems, was developed to flush away waste and prevent sewer smells and germs from entering homes (Figure 4). Europe was ahead of the U.S. in developing toilets and city sewer systems. Early toilets were designed to use lots of water to flush and clear pipes, but the polluted water still flowed to rivers. Traps often utilized mechanical wooden valves. And maybe you’ve heard the story (some say it’s an urban legend) about Thomas Crapper, a popular English plumbing fixture manufacturer in the late 1800s. He’s often credited with having invented the modern toilet. When our military boys went to Europe to fight in WWI, many of them saw toilets for the first time and these were labeled “Thomas Crapper.” Hence the American slang for toilet – the crapper. If you’re interested in learning more about the history of toilets and sewage systems, you may want to read Flushed: How the Plumber Saved Civilization by W. Hodding Carter. 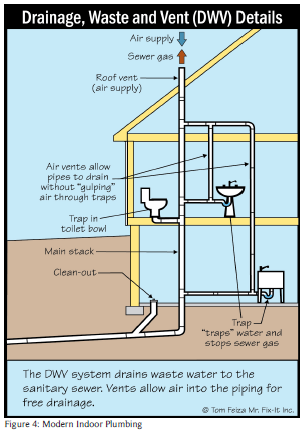 Modern Systems
Remnants of old sewer systems still exist in some cities. We see rain gutters connected underground to sanitary sewers; they were combined sewers when the city was built. There may be a “house trap” between the home and the city sewer to prevent sewer gas from backing up into the gutter system.

We see modern systems in homes with drainage waste and venting systems (Figure 5). The pipes are angled and sized to efficiently move waste and water together. Vents provide air to the system for proper drainage and traps prevent sewer gas from backing up into the home. Recent laws have required new construction to utilize low-flow toilets to save water and limit sewage treatment needs. This mandate resulted in a whole slew of toilets that just did not work very well. Toilet manufacturers eventually overcame the 1.6-gallon flush limit. Now we see pressure- activated toilets and dual-level-flush toilets. Supply systems are also changing due to limits on flow volume of shower fixtures and sink faucets. These are positive efforts to save water and energy. Some areas have systems that recycle gray water, others that reclaim heat from shower drain water, and circulating valves that quickly heat water on demand. Backflow preventers help prevent contamination of drinking water – and the list goes on. 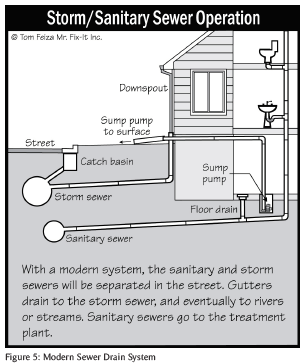 When you’re doing an inspection, think about surrounding conditions: ditches, storm sewer or pumping station. Where does that water go? Might it back up into the home? Every city is different. Understand your local systems and how they affect your inspection.

Looking to the Past and Future
We will see continuous changes to water supply and sewer systems and they’re all for the better. Think about how bad it was in 1915, when raw human waste was dumped into rivers and lakes, polluting our drinking water. That was only 100 years ago. We should be proud of how much we have improved conditions in the U.S. since then. We should also think about water problems in less developed countries and when we’re there, remember – don’t drink the water!

About the Author
Tom Feiza has been a professional home inspector since 1992 and has a degree in engineering. Through HowToOperateYourHome.com, he provides high-quality marketing materials that help professional home inspectors boost their businesses. Copyright © 2016 by Tom Feiza, Mr. Fix-It, Inc. Reproduced with permission. Visit HowToOperateYourHome.com (or htoyh.com) for more information about building science, books, articles, marketing, and illustrations for home inspectors. Please e-mail Tom (Tom@misterfix-it.com) with questions and comments. Phone: 262-303-4884..

> Free Webinar: Claims and Complaints: How to Stay Out of Trouble
Available Now
Presenter: David Brauner, Senior Insurance Broker OREP
David Brauner, Senior Broker at OREP, shares insights and advice gained over 20+ years of providing E&O insurance for inspectors, showing you how to protect yourself and your business. Watch Now! 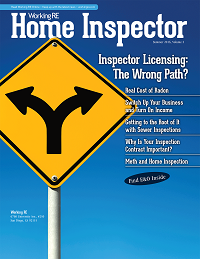